I’m always talking about digital skills and how important it is for people to have them, but at Tinder Foundation our focus is not always on digital skills alone. Our goal is to have a world where everyone benefits from digital, especially those who are socially excluded, and recently we sat on the steering group of a loneliness project being run by ACEVO (the Association of Chief Executives of Voluntary Organisations) to see how we could help tackle loneliness amongst young people and contribute to their report, ‘Coming in from the Cold’, which was recently launched.

The report contains some interesting findings. Until now there has been little in-depth research into youth loneliness, but this report is attempting to kick-start that research by using London as a test case to examine the causes and propose solutions. Focussing on people aged 16-32 the report estimates that the health, crime and unemployment costs – in part associated with loneliness – in London adds up to £34.5 billion. Young people who suffer from loneliness can often also have poor physical and mental health, a suppression of future job/earning opportunities or a drift into gangland culture. 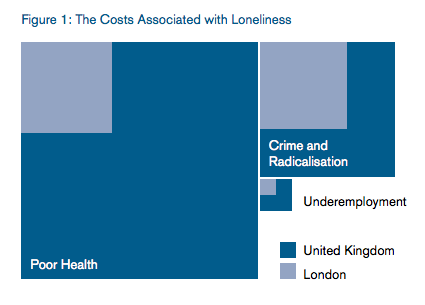 Image courtesy of ACEVO ‘Coming in from the Cold’

In a 2014 national survey by GetConnected, 34% of all people say that they often feel lonely but in 18-24-year-olds this number increases to 48%.

The survey showed that 64% of 18-24-year-olds in London contacted GetConnected about loneliness. Image courtesy of ACEVO ‘Coming in from the Cold’

Although not specifically recommended in the report, digital can play a part in tackling youth loneliness and in turn, tackling the associated problems. Through technology young people have access to a world of possibilities: they can connect with other people through email or on social networks like Facebook and Instagram to combat loneliness – online dating could be useful here too; they can use the internet to explore any health issues they may have; or they can surf the web for job adverts and apply online. I really do believe that digital technology can be a powerful tool here in reaching that 48%, we just need to make young people aware of how they can utilise it.

We put together a case study for the report (you can find this on page 50) about the great work being done by our local partner and UK online centre, HEBA Women’s Project. Located on Brick Lane in the London Borough of Tower Hamlets, the project was originally set up to help BAME women in the area to learn English and develop their sewing skills. But through this approach HEBA then take the opportunity to introduce technology to their learners as soon as possible, helping them to gain confidence in using computers and the internet. Many of them quickly learn that the internet can extend their horizons and begin to go online to look for jobs and explore their interests – as well as making friends at the centre.

Last year they supported over 100 young women who were able to use their newfound skills to form connections with their local communities and beyond, in turn reducing their feelings of loneliness.

There are so many social issues out there that a lot of people aren’t aware of, that technology could pose a solution for. It’s sad to read that 83% of 18-34-year-olds are ‘often, always or sometimes’ lonely and I feel like we can do a lot more to help. Thank you to ACEVO for allowing us to participate in this research, which has given us valuable insight into how we can help with this often overlooked social issue. Hopefully this London test case will be the start of something big. You can read the report here.

One thought on “How digital can help lonely youths”