Recently I met a group of friends for dinner. We all work in tech, and we’re all women. Throughout the evening we all seemed to come back to the topic of gender balance – or imbalance – in the tech industry.

I find it really frustrating that the tech sector is relatively new, but new instances of sexism against women are coming to light all the time (and they’re just the ones being reported).

A survey of Guardian readers into sexism in the tech sector found that 73% of men and women who responded think the tech industry is sexist. One 39-year-old male worker at an information security firm said: “I find women in my industry to be leaders of new ideas and equals in every way to men. I’m ashamed of being male sometimes for the way women are treated.”

Why is a new sector being built to exclude women and girls?

Sexism is an issue common to many other industries, but as you know my bread and butter is in digital. So, if we have a new way of living our lives (and a new industry creating it), and it’s mostly being built by men, where does that leave society?

I like men, I’m a mother to two boys, and I know several men who have stood on a chair and shouted “I’m a feminist”. I don’t want a world where the dial swings the other way and we exclude the men. But I’d really like us to try and get a better gender balance. Without it sounding like a complete compromise, I think the answer has to include men, as well as acknowledge that the current status quo is a problem and we need to actively encourage and support women explicitly into the sector.

Take a look at Emma Mulqueeny’s great blog, ‘How to put girls off programming and tech – the easy way’, as an example of trying to include more girls in tech with the best of intentions, but in reality doing the opposite.

When I was little, my mum modified the TV so that me and my siblings couldn’t watch ITV (to avoid the adverts). My brother would even say he was going to his friend’s house to watch TV so that he could work out what he wanted for Christmas. Now I understand what my mum was up to. Instead of letting the toy companies or cosmetic companies tell me what a girl was and what I should be, she was trying to let me decide that for myself. You only have to Google ‘Girls Toys’ to see the pinkification of our world. And I’m afraid it’s only got worse since I was a child.

I like pink, but just as one colour in the paintbox.

And what about me? I’m not exempt from sexism. Of course I experience sexism. Sometimes I know if I was a man I’d immediately have status. But I’ve spent my life trying to ignore gender and just getting on with it so I can do what I think needs doing. You might have noticed this is my motto for most things.

Dame Shirley is an amazing role-model, a pioneer and one of the most successful tech entrepreneurs ever. She says she “just got on with it” but in order to become successful she had to go by the name ‘Steve’ and her husband had to help her open her first bank account. She did so much for women to work flexibly in technology, as well as other important issues such as equal pay. Watch her brilliant TED Talk – ‘Why do ambitious women have flat heads?‘ to find out more. Please do take the time to watch – you’ll even have a laugh!

Unfortunately after all of the groundbreaking by Dame Shirley and others, we don’t really seem to have gone much further. In fact has it got worse?

The answer has to lie in both men and women creating the right working environments that are fair and equal.

I won’t pretend to have the answers to these questions because it’s clearly not that simple. Does banging on about it even help?

Martha Lane Fox has set up Dot Everyone, with one of her early priorities a focus on Women in Digital; their website says: “Our objective is that 50% of the people that design and make Britain’s networked world will be women. Our initial focus will be on: mapping and assessing activity of women in digital; building an evidence base of the challenges faced by girls and women; and creating a funding vehicle that invests in sustainable social enterprises helping girls and women in digital.” Don’t just watch this space, but go over to her website and see if you can help.

I’ll be meeting up with my dinner friends in the not too distant future to talk about how we get the balance back, how we can help the women and girls following behind us, and what we can actually do that will make a difference.

The optimist in me likes to think things are getting better, slowly; more men are talking about this as an issue. But I’d rather make progress more quickly; let’s tackle this with a sledge hammer not a toothpick. We deserve to have a digital world where men and women are respected and have equal opportunities; where women also build the digital society. After all, we live and work in it too.

What were you doing in July 2013? I’ll tell you what I was doing; I was anticipating the start of something great for Tinder Foundation as we embarked on a partnership with NHS England.

Long before we launched the now award winning Widening Digital Participation programme in the summer of 2013, we’d been talking internally about the correlation between health issues and digital exclusion. You can’t ignore facts, and the facts were showing a huge synergy between the two.

Two years into the three-year project, and the facts once again speak for themselves. I’m so glad we’re on this journey with NHS England at a time when the shift towards digital by default services has become even more widespread throughout health services in the UK, and the danger for people suffering health inequalities to be left behind becomes even greater.

Since the project began we have:

The numbers are growing all the time, our partnerships – both local and national – are working. Great things are happening through digital.

But, there’s so much more we can do. We’re well underway with year three of the programme and we’re looking ahead to what happens when we finish in March 2016. But, I don’t think of it as the end because the last three years we have laid the (strong!) foundations – it’s just the start.

Read our new report, it identifies four key things we intend to do to extend the life of our work:

If we can do this, then we can help so many more people, like the wonderful Amy, who’s story you can hear in this video:

If you’ve been reading my blog for a while, you’ll know that Tinder Foundation’s Digital Evolution Conference, which takes place every November, is without doubt one of the highlights of my year. 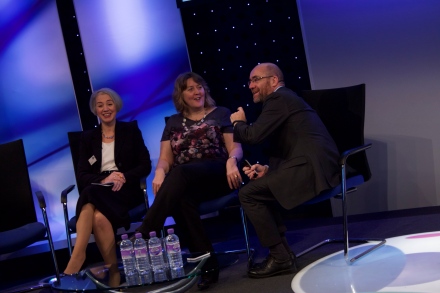 And yes, you might think it’s a bit soon to be talking about an event taking place in November as we’re only just in August, but I can’t help but get excited by how this year’s conference is already shaping up.

I won’t give too much away at this stage, but I do want to say how pleased I am to have an incredibly talented individual joining us on the day.

If you’ve ever met Maggie, or had the pleasure of hearing her speak, then you’ll know why I’m so excited to announce that she will be chairing this year’s conference.

Maggie is one of my heroes – she knows loads about technology, she shares my beliefs of having a society where everyone has the opportunity to benefit from digital, and she’s a great person too.

She is the perfect person to host.

Have a watch of Maggie speaking below.

I can’t wait to reveal more of what we’ve got planned, but in the meantime you can find out more about the Digital Evolution: Building a digital nation conference (Wednesday 25 November at the BT Centre, London) here.

Tickets are now on sale with a special introductory offer available until Monday 7 September.