I returned to work this week after being on holiday for a fortnight. I felt relaxed and ready to get back into the swing of things. I sat down to catch up on all the digital inclusion news that I may have missed while I was abroad and I couldn’t believe my eyes when I saw the key finding from Ofcom’s annual Communications Market Report. The headline: “Fifteen million UK internet users have undertaken a ‘digital detox’ in a bid to strike a healthier balance between technology and life beyond the screen.”

I thought it was a joke.

After chatting to my colleagues I realised that it was all true. On one side of the spectrum, in the UK there are 12.6 million people who lack the very basic internet skills; on the other side there are 15m who are so sick of technology that they’re purposefully spending time away from it. The question I have is: why would anyone want to do this?

The Ofcom research says: “The [research] reveals how our reliance on the internet is affecting people’s personal and working lives, leading many to seek time away from the web to spend time with friends and family.” 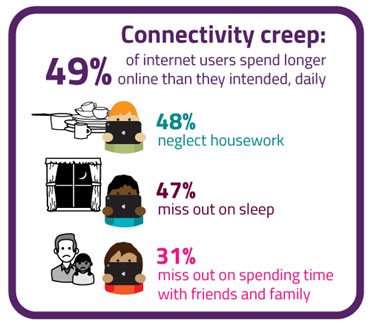 I don’t think this is the reason. I think the reason that so many people have decided to spend time away from the web is because it’s the ‘fashionable’ thing to do. There may be some people who genuinely believe their addiction to tech is affecting their lives, but to me, the problem is with the person, not with technology.

It’s all about balance. All of the digitally included population can choose how much (or how little) digital channels they engage with.

Many people spend more time than they should online because they have a deep-rooted ‘fear of missing out’. Addiction is human nature and technology simply presents new options for this.

Thinking about when I was on holiday for the past two weeks, the idea of going through it without the internet just seems absurd. Technology has been developed over time to help make our lives easier, and I genuinely think that it does. I was able to do my check-in online before reaching the airport, I had all of my travel documentation stored on my phone instead of printing out masses of paper, and even when I reached my holiday destination I was able to do things like look up a TripAdvisor review of a restaurant we thought looked nice to see if it would be a good place to eat. Another thing that I did with my Kindle was download an audiobook before a long train journey, so I could listen to it whilst still being able to take in the gorgeous scenery outside the window.

I didn’t spend my whole holiday stuck to my tablet/phone though – hence why I managed to miss the launch of Ofcom’s report – because I know that it’s OK to not be on Twitter replying to tweets, and I know it’s OK to not reply to an email immediately as soon as it comes through. If something is that important and needs an immediate response, the person will call me.

One aspect of the report that I found particularly interesting (and also quite entertaining) is that 26% of adults have sent texts or instant messages to friends/family while in the same room. Can you believe it? 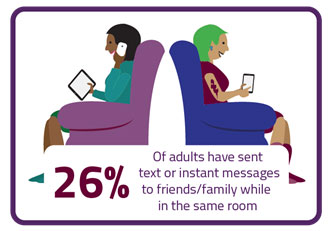 And 40% of adults (that’s four in every 10 people) felt they’d been ‘smart-snubbed’ at least once a week, with 17% saying it happens to them on a daily basis. Up until now I had no idea what smart-snubbing is – it means to ignore someone because you’re too engrossed in your smartphone or tablet. This is a prime example of obsession.

To all the ‘digital detoxers’ out there I say, if you want to visit or talk to your friends and family more, just do it! If it’s not possible because they’re in another country, like my son for example, technology isn’t a hindrance, it becomes an enabler. It means I can use services like instant messaging to get in touch with him and make calls through data and WiFi without the big phone bill that used to come with international family contact. I’d never dream of going on a ‘digital detox’ because it would mean not being able to do things I need to and want to do.

Yesterday we put a poll on the Tinder Foundation Twitter account asking whether our followers make an effort to spend time away from their phone and the internet. 42% of respondents said that they do, whilst 58% said that they do not. I’d be interested to chat to those who said they do, to find out exactly why they think that they need to.

The internet makes our lives easier in so many ways and to me, giving that up intentionally seems absurd. Maybe my earlier hypothesis was right; maybe the ‘detoxers’ really are just doing it because giving technology up is the ‘in’ thing to do. If that is the case, I can’t wait to see what fad comes next.

At the beginning of July, I attended an event at BFI Southbank in London to view three films, marking the end of the Open Cinema portion of our Reboot UK project. It was a combined event with the Pathways to your Future programme – a Cisco-funded tech internship programme.

It was an inspiring two hours and a great way to spend a Monday afternoon seeing how the Reboot UK programme has benefitted people, and hearing from some of the partners involved, including Homeless Link and Evolve Housing, really brought home the huge impacts the programme has been having.

I’m very proud of Reboot UK, which aims to help families in poverty, homeless people and people with poor mental health to improve their wellbeing through digital. You’ve heard me say it before, and I’m about to say it again: there are 12.6 million people in the UK who lack basic digital skills and the groups who are being supported through Reboot are far more likely to make up a portion of this number. They are at greater risk of social exclusion and have the most to gain from improved digital skills and access to online resources.

You can find out more about Reboot UK on the Tinder Foundation website, but the real reason I wanted to blog about this afternoon at BFI is because I want to share the videos. They were created in conjunction with three Reboot UK delivery partners: Leeds Mind, Evolve Housing + Support and Abington Centre of Education and they really demonstrate the impact that the project has had and show how it will continue to support those most in need.