One cold, dark, rainy Friday morning in January, I got onto the 7.27am train from Sheffield to London and sat at a table opposite a woman. I had those “winter blues”; too many months without proper sunshine, catching early morning trains, and Friday is usually the day when I get to see the team in the office.

After a while the woman opposite and I got talking. She worked for NHS England and was also feeling tired having stayed up until 2am working on an important document. The first nice thing was that she had heard positive things about Tinder Foundation and our NHS England Widening Participation programme. The second nice thing was that I found myself talking about the work I do – with the team, and with the thousands of community partners that we have – and about the impact of that work. One person I talked about in particular was Roger Hamilton, and his remarkable story. 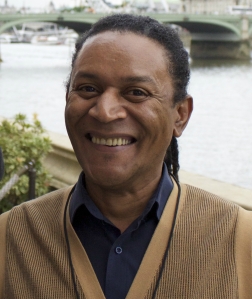 The first time I met Roger was at an event at the House of Commons that we hosted back in 2012, where he was working at St Mungo’s homeless charity (now St Mungo’s Broadway). He had returned to the UK after spending some time in Jamaica, and found himself without work, without friends and family, and without anywhere to live.

He spent ten years homeless, sofa surfing, living in hostels, and some time rough sleeping, and this chaotic lifestyle led to poor health and to despair. In 2010 he found his way to St Mungo’s, where he found shelter and support, and he then visited a local UK online centre (Holborn Library) where he learned how to use the internet and he found hope.

Roger told me that when he was living in Jamaica, computers and the internet were luxuries. When he came back to London he didn’t have the skills to participate in society, and he didn’t have the skills he needed to find work. Roger got the basics of how to use the internet at the UK online centre in Holborn Library, using Learn My Way; he was then supported by St Mungo’s to get more skills.

He felt empowered, he felt in touch with the world, and he found himself supporting other people at St Mungo’s to keep motivated to get the skills they need for an increasingly digital world. He began by volunteering and then moved into paid work as a tutor, but then he left St Mungo’s to move onto another job and we lost touch. I was so moved by Roger and how he spoke so eloquently and powerfully, and was so committed to helping other people to make the same transformative journey he had made, that I never forgot him.

Last year I was delighted to get an invitation to visit to St Mungo’s Broadway, because I have always been impressed with the work they do. I met with the CEO and his team, and then had a walk around their venue and met some people who were just beginning to use the internet and were feeling more positive about their futures. I asked one of the staff if they remembered Roger, she looked at me a bit confused, and said “he works here”. So, Roger had left and come back again. I was so happy to see him again and to hear about how well he was doing. He is now a Job Coach at St Mungo’s Broadway and he’s helping people there to gain skills, and dignity, and hope.

The woman on the train remarked on the huge cost to the NHS of homeless people, who often suffer poor health and piecemeal support from the health service. A 2012 report says that just one homeless person costs Government between £24,000 – £30,000 a year, and it’s likely that figure is now even higher. So policy makers can look at the fiscal benefits, as well as the human benefits, of helping just one person who (like Roger a few years ago) is homeless.

Roger’s story is so powerful, and I thought you too would like to feel this ray of sunshine whenever the sky near you is looking a bit grey and miserable, or you’re needing to hear how one man’s new found hope led him to help hundreds of others to take the same journey.

You can hear Roger tell his story in his own words.