Last Thursday, we were back at the BT Centre for our 8th annual conference – Digital Evolution: Healthier. Happier. Better Off. I know that success can’t always be measured through social media, but if it was, we can’t have done too badly – #DigiEvol19 was the 15th highest trending hashtag in the UK with more than 2,100,000 impressions on Twitter. I’m still smiling from such a positive, inclusive, and inspiring day.

It is by bringing together partners from a range of sectors – not least the community organisations that make up the Online Centres Network – that the Good Things Foundation annual conference has become a landmark event in the digital inclusion calendar. As well as providing a forum to debate some of the most important issues of the day and share ideas on how to support some of the hardest to reach groups, there are always inspirational speakers to give us food for thought – and this year did not disappoint.

There were four Online Centres – Being Woman, Smartlyte, Leeds Libraries and Destinations At Saltburn – who spoke this year. And spoke very much from their hearts about the work they do and the people whose lives they have changed for the better. We’re so lucky to have people such as these in the network and I know the audience were hanging on their every word.

We heard from a range of interesting and inspiring speakers – including Hannah Cornick from BT who spoke about their partnership with Good Things Foundation for the Skills For Tomorrow programme, and Liza Belozerova from Google.org, who told us the story of 93-year-old Poul, a retired doctor from Denmark, who was able to participate in digital training from a bus tour through his hometown. When 20% of Europeans have never accessed the internet, these are the stories we come to the conference to hear – reminding us that whilst Good Things Foundation may focus on the UK and Australia, this is a global challenge.

There may be differences in how digital inequality manifests itself across the world, but it’s probably fair to say that many of the advantages of becoming digitally able are universal. At the panel event “Digital inclusion: can it make people healthier?”, the verdict was unanimous – yes, it can, and yes, it does.

And, this year we were fortunate enough to be supported by two former Lord Mayors. The first was Magid Magid, formerly the Lord Mayor of Sheffield, and now Green MEP for Yorkshire and the Humber. Channeling the power of modern technology, Magid sent over a video from Strasbourg to talk about the way digital can give everyone a voice in our democracy.

Peter Estlin was with us in person. He recently finished his term as the Lord Mayor of the City of London and has launched future.now during his time in office – a coalition of Government, industry and the voluntary sector (with Good Things Foundation as a founding partner). You can read my blog about the launch here.

Although the conference recognises a number of challenges faced in communities, it’s also a time to celebrate the success of Good Things Foundation and our fantastic Online Centres Network – improving more than 3,000,000 lives through digital since 2010.

This of course wouldn’t be possible without the Online Centres Network, who work tirelessly in communities to support people to improve their lives through digital. We asked centres what it meant to them to be part of the network, and you can see their answers below.

It was no surprise that “support” cropped up as central to the experience of being part of the Online Centres Network. 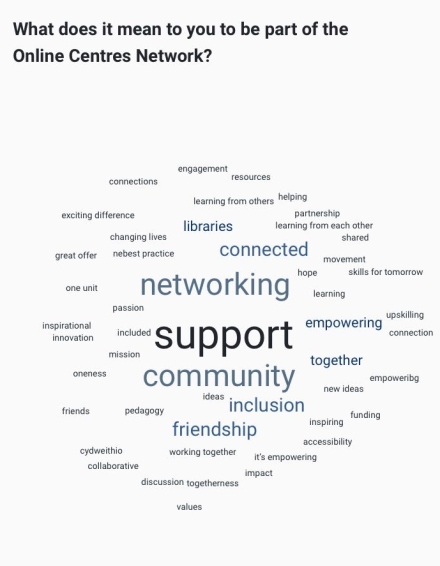 With the general election looming, one of my favourite sections of the day was asking delegates – primarily from the community sector – what they wanted to ask the new Prime Minister. And the questions weren’t surprising – from how we will close the digital poverty gap, to how we can support people to use online public services and how grassroots organisations providing this support will be funded.

As we edge closer towards the election on 12 December, we’re calling on the next government to make bridging the digital divide a priority. Every party has made a pledge to roll out high-speed broadband in one form or another – and yet the manifestos have fallen short on their commitment to invest in people, and the skills and support they need to access this new infrastructure.

When 11.9 million people lack the digital skills they need to function in the modern world, we’re a long way off achieving digital equality. For £734 million, alongside investment from companies, the Government could close the nation’s digital divide and ensure a brighter future for everyone. 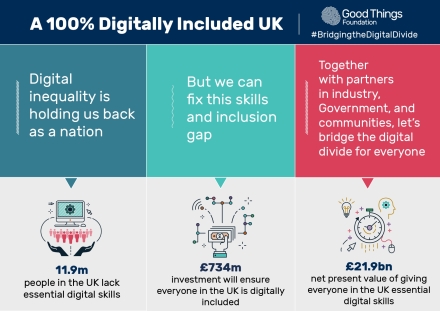 It’s always a privilege to be able to bring together hundreds of inspiring people at our conference, all passionate about making digital inequality a thing of the past. From the amazing staff in the Online Centres Network delivering digital inclusion at the grassroots level, to the Government departments and policymakers, to the third sector organisations and corporate partners who share a commitment to our mission.

And in a way, our conference is a microcosm of the kind of nation we want to create. Because we can fix this skills and inclusion gap – but only by working together with partners in industry, Government and communities.