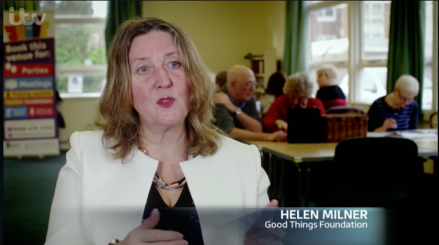 If you weren’t channel hopping between the 7pm and 8pm showings of Emmerdale to keep up with latest in the saga of Cain Dingle and the return of Kim Tate last night, you might have seen the excellent episode of Tonight on ITV at 7.30pm, entitled Priced Out? Old and Offline – a whole half an hour dedicated to the issue of digital exclusion. It was brilliant. If you missed it, don’t worry –  it’s available on catch up via ITV hub: https://www.itv.com/hub/tonight/1a2803a1223

It didn’t just tackle the issues facing people who are digitally excluded that we’ve been talking about for years – it also highlighted the vital work we do day-in and day-out at Good Things Foundation to achieve social change through narrowing the digital divide. I was honoured not just to be on it, but to have so much of the work Good Things and our partners showcased to the nation. And, primetime coverage for such an important problem facing society – that as the world becomes digital, people are getting left behind.

The show raises some critical issues – 11.3 million people in the UK lack digital skills and, as we saw, this meant they couldn’t access basic services, whether that is jobs, benefits applications, housing, or connecting with loved ones. The internet is becoming increasingly integral to society and the economy. Yet shockingly, in 10 years time 6.8 million people (12% of the adult population) will still be digitally excluded. Both their life chances and their quality of life will be seriously affected if they don’t have basic digital skills.

One of the most striking stories in the show was Carolyn from Liverpool, who was one of our 2018 Get Online Week case studies. Carolyn is a single parent who had spent the first 47 years of her life offline. She told ITV,  “Internet didn’t mean anything to me… I’d see the kids on (the internet) and think I would have a go one day, but I was just too scared.” Then she was made redundant from her job as an office cleaner and struggled to find a new job through the more traditional methods she’d relied on before.

Carolyn needed digital skills, not just to search for a job, but to actually get the job through building a CV and applying for work online. I recently read that 100% of vacancies for large organisations were advertised purely online, so without help, Carolyn would have fallen at the first hurdle.

Carolyn was supported through one of our amazing Online Centres –  Kensington Community Learning Centre. In the words of Deborah, who helped tutor her at our Centre, Carolyn “took to it like a duck to water”, and thanks to her newly acquired skills, she got herself a new job.

I mentioned on the show that even people on the lowest incomes are able to save an average of over £500 a year through basic digital skills, as it’s easier to shop around for goods and services and get the best prices. Having no internet access can exacerbate the ‘Poverty Premium.’ The people most likely to be digitally excluded are the elderly, people who live rurally, people who are in and out of work or out of work completely, and people with disabilities. The sad reality is that it tends to be those who need the internet most are the ones who don’t have access to it. This is driving our campaign for a 100% digitally included nation through our Bridging the Digital Divide campaign.

Which is why it was great that the show covered the 100% Digital Leeds programme, and the work lead by Dylan Roberts, Leeds City Council’s visionary Chief Digital Officer. The work they’re doing is not just helping them to become digitally included – it is also helping to improve their lives. The show covered our friends at St George’s Crypt, a charity in Leeds who help homeless and vulnerable people, and who are also supporting people to get basic digital skills which can help from everything between knowing when the bus arrives to applying for benefits, college courses, and housing. It transformed the life of Stephen who, it was clear to see, has a much better and improving quality of life thanks to being digital included.

Whilst, for most, this week’s Facebook outage was an inconvenience, the story of Lillian highlighted that social media is about much more than just sharing pictures of your dinner or your cat. Lilian had been alone since her husband died, so she sought help to build her digital skills from Ryan and the team at Starting Point in Stockport. I think we were all touched by her amazement after sending her first email, and before long she was video-calling her family in Wales, adding friends on Facebook and getting broadband installed at home.

And the show also covered the story of Emma Krause, in Saltburn, who – thanks to the support of her local Online Centre Destinations – enhanced her own small rural business through building up her digital skills and embracing being online. Not only is she banking online, but she is also using more advanced software to improve the artwork she produces and to develop and run her company’s website and social media, turning her business into a global success story.
Whilst Kim’s return last night shook things up for those in Emmerdale village, I hope that last night’s episode of Tonight shook things up for viewers at home – inspiring those who don’t have digital skills to take their first steps, and encouraging those with offline friends or family members to point them in the direction of support. This can be through the Online Centres Network, or our Learn My Way site. It was inspiring last night to see the work of a handful of organisations in our network – Starting Point in Stockport, Leeds Libraries and the 100% Digital Leeds programme, Destinations at Saltburn and Kensington Community Learning Centre. There are thousands of organisations across the country helping people to change their lives through digital, and it was great to see this work, and the impact it is having, showcased right there on the telly in my living room. I still feel so proud. Do watch it – you’ll love it!

One thought on “ITV Tackle Digital Exclusion On Primetime TV”