I’m sure when you think of Salford, you think of Media City, culture, architecture, and… Manchester (the neighbouring city). In many people’s minds, Salford is probably one of the last places you’d expect high rates of digital exclusion, but actually, 24% of adults in Salford lack basic digital skills.

We’re delighted to be working with Salford City Council on a bold, ambitious, and groundbreaking digital inclusion project, Digital You, to bring all the benefits of the digital world to almost 8,000 Salford residents, with a goal of helping them to transform their lives.

We will be working with more than 25 local Salford community organisations – libraries, Gateways, community centres, community organisations such as work clubs and women’s centres, and housing associations. Any organisation who shares this vision of a better world for socially excluded people through digital – and who wants to join this movement – can. Our goal is to build on what’s already great in Salford – this is about growing capacity so that it’s not just a project but it’s a sustainable movement by working together.

It’s all part of a bigger project called #DigitalSalford and I was delighted to attend the launch event last week where I met lots of interesting and inspiring people, including Andy Burnham, Mayor of Greater Manchester, and Paul Dennett, Salford City Mayor. 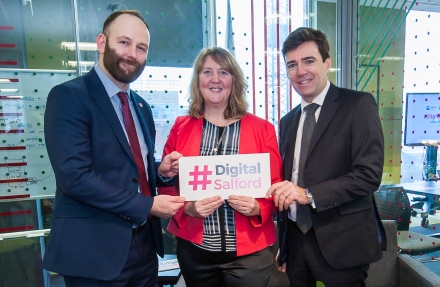 Me with Paul Dennett and Andy Burnham

There were lots of people at the launch event who were intrigued by Digital You and wanted to find out how they could be involved in the project. There was a sense that this was collective and collaborative action towards a shared goal – and there was a high level of enthusiasm.

Local Authorities tell us that it’s important for them to have digital on their agenda, especially when there are 11.5 million people in the UK without the basic internet skills they need. The world for many people is difficult. Many people don’t have enough money and find juggling with the little they have hard. Many feel isolated from family and community. We are committed to helping people improve their lives. It’s not about technology it’s about people – and people’s place in our digital society and our digital economy.

Digital inclusion is about two things, one, about helping vulnerable people to have better lives and, two, it’s about making sure no-one is left behind as digital improves the access, effectiveness, and convenience, of commercial and public services.

The UK government is taking action with things like the Digital Skills Partnership board, but with other priorities like Brexit at the forefront of their mind, and with powers being devolved to some local authorities, in the not-to-distant future it will be up to councils to lead the way for people, organisations and businesses in their area to fully participate in our ever-growing digital nation.

In Salford, over the next two years, we will be helping some of the city’s most vulnerable people to grow the basic digital skills and confidence they need to thrive in today’s digital society. Salford has a bold ambition to be a digital city using digital transformation to ensure the Council’s services are a great experience for everyone. Digital You is making sure that when digital is in everything it’s also for everyone.

I applaud Salford City Council for being bold – for their leadership, their vision, and their investment in this urgent agenda – and I strongly encourage other local authorities to follow this closely.

We’re always happy to chat about what we’re doing and how we may be able to work together.

One thought on “Digital is in everything and for everyone: A local approach to digital inclusion”