On Wednesday evening I was on a train coming back from London and chatting to my colleague Alice about how important the internet, and good access to the internet, is to us personally. Alice had recently moved house and all her furniture was in storage, but she was happy as the broadband was connected and she had a beanbag to sit on. 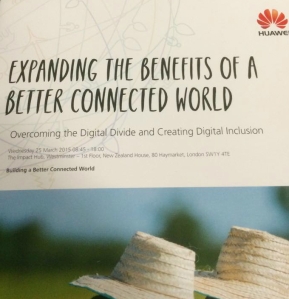 Alice and I had been to an event where about 60 social entrepreneurs, business people and delivery projects from around the world had been discussing the Why and the How to connecting the last 4.4 billion people who still can’t or don’t use the internet.

In the UK we still have 10 million people who don’t have the basic digital skills to use the web. As part of my day job I get meet with many of the thousands of people that Tinder Foundation and our partners help every month, and I hear about the life changing effect the internet is having on new users who have: found work, saved money, been in touch with distant friends and relatives, no longer felt lonely, got healthier, and stopped rough sleeping.

Scaling that up, a vision of connecting the 4.4 billion people unconnected is mind boggling. Many of the stories, I heard on Wednesday, of lives transformed were familiar to me: people getting new skills so they can find useful work, people finding a voice, people linking to essential services. But other success stories were about how to use technology to solve very different challenges. For example, Instant Network School from Vodafone Foundation helps children displaced by conflict access education resources via tablets and the internet. We heard from Internet.org about infrastructure solutions, free data to use basic Facebook and other public services for mobile phones in the developing world, and about digital literacy.

There were common strands in our discussions. Such as technology is just the tool; what we really need to make change happen is to develop programmes importantly involving users and helpers that result in behaviour change. We talked about value and cost. In the UK I keep banging on about the people who just can’t afford the internet.

For many people still digitally excluded in the UK, just like people in some of the developing world, the choice is an internet connected device or something else – where the ‘something else’ may be food or travel costs to get medical help. It’s just like the prevent or cure agenda: we never get truly focussed on prevention when there are so many people who need curing. I often feel hopeful and frustrated in equal measure.

Bob Gann, from NHS England, and I gave a short talk on our Widening Digital Participation Programme. I brought it right back to the 4.4 billion people and told the story of just one of them – Ron, who used to live in a tent next to an A road just outside Hull. 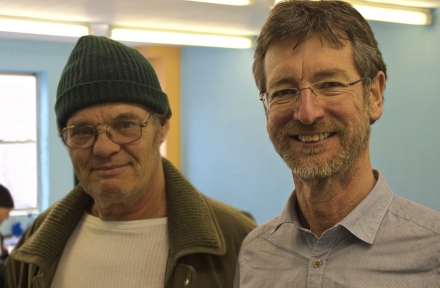 Too often the big numbers obscure the fact each statistic is a person and each time they are empowered to change their life for the better that’s one more life improved. Ron’s story has been told to the UK Secretary of State for Health, Jeremy Hunt, and this shows that one small change in one life has the potential to change the opinion of the man in charge of the NHS. We have to look bottom-up but we also need to make sense of it top down, so we can scale change as well as learning from local practice.

Bob and I talked about the Tinder Foundation Network Effect. How the thousands of hyperlocal partners we work with in our network achieve more because they are part of that network. Yes, it’s about products and services and platform and grants – the things we provide. But it’s about more than that, it’s about belonging to something bigger. Ron was helped by Inspire Communities in Hull; Inspire Communities’ work is very important. Southampton Library, and Starting Point, and Cook E-Learning, and the Bromley By Bow Centre, and thousands of other hyperlocal partners work is very important. They all tell us they know that by working with Tinder Foundation their work, their expertise and their efforts are all respected and valued, and they also tell us that they feel part of something bigger. We are all part of something bigger. Together we have a bigger impact than just working alone. That’s the network effort.

Alice and I met people in India and South Africa who are working in a similar way to Tinder Foundation. We will keep talking. We now belong to a bigger network of people with a similar vision and tireless energy to keep going until we cross the finish line.

Yesterday’s event was hosted by Huawei, and they published a microsite a year ago with articles and further information about the 4.4 billion unconnected.

5 thoughts on “Connecting the 4.4 Billion Unconnected”