I spent my hour yesterday (Sunday 30th October) in central Sheffield talking to people about how and if they use the internet – and trying to persuade them to give it a try if they didn’t. It was great to have the help of Emma Cooper (@Em_Cooper), in the photo below with one Sheffield interneter enjoying the Halloween Fair.

As I’m into my stats I was surprised to meet lots of people in their 30s and 40s who had never used the internet. Between Emma and I we think that we persuaded about 30 people to get online and to go to one of the 50+ free events happening around Sheffield this coming week. 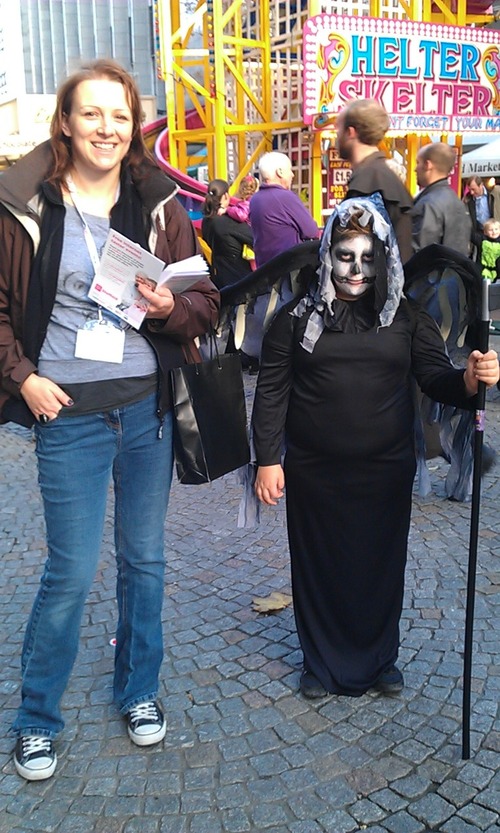 Of course we got lots of people who just said “no”. The two most common excuses for not being online were “I’m too old” and “The internet is too dangerous”. It’s was great to have seen the BBC video last week of the 104 yr old man helping his young (89) wife to get online – if he can do it anyone can!

With two women I spoke to, I got the sense that it could be a real turning point for them, and both of them asked “do you really think I could do it?” and “can people like me go to these events?”. They had previously assumed that the internet was something for other people so it was great to reassure them that they could give it a go.

One man I spoke to will now definitely get online. He said he thought he needed more than an hour – so I reassured him that there was help for him for as long as he needed it. His friend suggested that he could now get “one of them cameras”.

Cost was an issue for some people, particularly younger offline people. The Plusnet offer of 50 free one year’s broadband which is available to Sheffield residents was a significant incentive for some of the people I talked to, and shows just how important having the support of organisations like Plusnet is.

It was good to have the “give an hour” message for the younger people and many of them were going to encourage their grandparents to get online. Unfortunately lots of people had tried to help a loved one get online, one man had even bought his mum a computer, but they had all failed and had decided that nothing was going to help.

There were also lots of people who said they didn’t know anyone offline. It was nice to talk to students in Sheffield whose Grandparents email them regularly and who delighted at how much their loved ones kept in touch online. One woman I spoke to in her 70s told me she didn’t know how she would cope without the internet and thanked us for helping others to get the same benefits that she enjoyed.

I even caused an argument between two women in the late 40s. One online, one offline. When I couldn’t persuade the offline woman that the internet had anything to interest her, they walked off. However Emma heard them walking up the street arguing about why the offline woman wouldn’t give the web a chance. If we didn’t get her online, at least we started a conversation.

This week, I’m giving my blog up to different members of the UK online centres team who will be blogging about how they’re giving their hour in and around Sheffield, so do keep an eye out!