On Monday I read this tweet from @nyreescott: “overwhelmed. Given 20+ handwritten thank u letters from school kids after Skype session with teachers +St Lucia”. I remembered that Nyree had told me last week that she had a session with a class of Year 6 children in the Cambridgeshire fens to show them (and especially the teachers) how to use Skype. Just to make it especially interesting she make contact with a friend in St Lucia to show the very real power of the internet.

So 98.6% of under 25s are on the internet, we hear talk of Digital Natives, but – just as I did in the 1980s – we often under estimate the pure WOW factor of this tool we access everyday on our multiple devices.

Back in 1984 I worked on the Microelectronic Pilot Project at the National Assocation of Citizens Advice Bureaux as part of a small team whose job was to try to persuade 50 CABx that a computer was a good thing. In 1985 I left there to join TTNS – a News International venture on the back of the Microelectronics Education Programme; I was the National Database Manager (basically in charge of making web pages).

In 1985 I watched as children were thrilled with emailing eachother across a room, in 2011 I am thrilled at seeing a 50 year old woman sending an email for the first time. In 1986 I helped children to link up with other online children on the other side of the globe via the Computer Pals Across the World programme*. By early 1987 I had dismissed this computer pen pal thing as being a bit limited; after all I had devised and delivered an Online Schools Election with the BBC (with John Craven’s Newsround) and I was about to launch a WorldTour taking school children around the world using bulletin boards (a bit like social media in black and white).

Nyree reminded me that I was wrong in 1987. Children and adults love to learn about other cultures, other places, the more remote and different the better, and if it’s just an email then that’s fine. This wonderful tool we have which links people together through a phone line or something similar is just amazing. Nyree had a 20+ letters from delighted children, one of them said: ” I enjoyed the day you came so much I actually had a dream about it. I wish you come again and help. Thank you.” 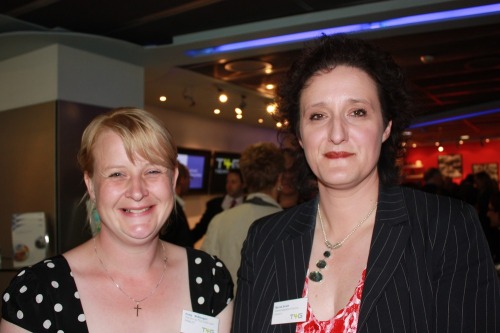 This is a picture of Nyree with Vicky (who went from terrified to award winning evangelical volunteer).

One thought on “Children dream of electronic communications”